It's 2122, and you're a billion miles away from home. Your partner, Sam, is still there, and you exchange letters about your lives, but sometimes, stuff goes wrong, and you have to ask yourself... how much are you going to say?

There are differing endings, so definitely give it a replay if you're curious.

(P.S. I apologise for any scientific inaccuracies)

Really liked this. It shows how you can take a certain theme of choice "Is ignorance bliss?" and repeat it through many choices over the game to develop it and build up. A clever way to a cohesive short IF. I hope to see more stuff from the creator in the future!

Thank you! I'm glad you liked it.

First off, I really like the story! However, I can't seem to get a different ending. [SPOILERS]

The doctor never seems to believe me and always rips up my notes when I try to convince him of the supernova, and it seems the only thing that I can change is whether or not Sam knows that the world is going to end. I might have missed a combination of choices, but I've done about 5 or 6 run throughs now and it seems that nothing really changes in the end. Am I missing something?

Hey, thanks so much for playing, I'm glad you liked the story!

Oh man, that was a bug! I had a statement in there changing a variable to help me debug, and forgot to comment it out again before submitting. Thank you so much for bringing this up!

I've just updated the submission now to fix that, so now it'll be possible for Dr Laine to believe you if you choose the options that annoy him the least :)

The update worked! But: [SPOILERS]

While the doctor now does believe you, the later bit of the story still doesn't change. I don't know if it is possible to do anything about Arbor or to help Sam or anything, but even with the Doctor now believing me if I choose to tell Sam everything she still says "Maybe you were wrong and that miserable doctor was right to dismiss you" (Something like that. I forgot the direct quote.) implying that we told Sam that the doctor didn't believe us.

I’ll give the code another look, thanks for helping me track down inevitable sleep deprivation-induced slips :)

But, if you’d like to know everything about possible endings:

There isn’t a happy ending where Arbor, or Sam, can be saved. I thought about putting one in, but I wanted to focus on having the player make tough choices in the face of an impossible situation, and I felt that including the possibility of rescuing Sam would detract from that.

So, the different endings are how Sam reacts to your last letter (if you send one), and that depends on the choices made in the previous letters.

I'd be interested to hear thoughts on whether that just feels unsatisfying though.

I feel like if anyone wanted to avoid spoilers they'd have stopped reading this thread by now, but still [SPOILERS]

Honestly I'm a bit conflicted on a "happy" ending. From a story standpoint the ending works nicely. Either we confide in Sam and we can say they Sam was able to live their last days however they wanted, or we hide things from Sam and they live their last days in blissful ignorance. It's bittersweet and sad, but as the story said we did all we could. We can't evacuate the planet and smuggling Sam would be near impossible given everything is in lockdown due to all the damage and low rations.

However from a gameplay standpoint it feels like it falls short. We go into this game under the impression that as a player we make choices that will change the story, only to find out that no matter what we do the ending is mostly the same. We can't save Arbor or even help Sam in any way. What was the point of kissing up to Dr. Laine to get him to believe us if it doesn't change anything? Why should I as a player care about the choices I make if at the end of the day it's not going to matter? Arbor blows up and Sam dies, the end.

If anything, the endings could differ as so:

If we tried to prove that there was an error in the code but Dr. Laine doesn't believe us, then when the supernova happens we get an "I told you so" moment with Dr. Laine. Or maybe Dr. Laine is tried for severe negligence while we are awarded for correcting the error and preventing something like this from happening again. We get those riches and acclaim that we were talking about with Sam, but it's a hollow victory since Sam's gone now.

Things like that. There is this part of me that is saying "yes, let me at least save Sam if I can't do anything about Arbor." but it's your story. At the very least I feel that there should be different endings like the examples above that help from a gameplay standpoint that would give the choices we make more meaning.

Firstly, another thank you for taking the time to share your thoughts, the feedback really means a lot to me with this being the first game like this I've made. And secondly, yup you're probably right about the spoilers, but, hey, just to be safe: [MORE SPOILERS]

I entirely see where you're coming from, I had similar doubts! Tbh, I think I got carried away with wanting to pull off a hard-hitting bittersweet ending (always been a sucker for those), and conveying a sense of helplessness, and ended up not properly considering the impact on player agency as a result of that.

I intended to put in more interesting final scenes with Dr Laine at the end, but honestly I'd kinda run out of energy by then and decided to focus on streamlining and proofreading what I already had (with questionable success, haha), so I fully take on board what you say about the interactions with him not really mattering in the end. Once the Jam is over, I'd love to try and fix that, maybe add an epilogue. I really like your thoughts on having a 'hollow victory' with the Doctor being caught.

And yeah, actually, now that I think about it, I suppose having the option to rescue Sam doesn't necessarily negate the bittersweetness of the ending if the rest of Arbor is still destroyed, hm...

Yup, I think I might well come back and make changes after the judging's over! 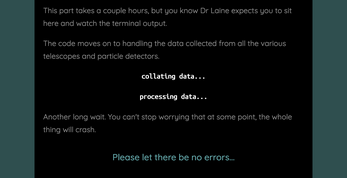